Hey folks! Next up is a pretty big chapter, where Jon fights in the Attack on Castle Black to the tragic conclusion of his and Ygritte’s relationship. However, I haven’t even outlined that chapter so it’s going to be a while coming (especially since I have grading right now).

In the mean-time, though, I’ve got some choice stuff on the tumblrs…

Hey folks, if you’d like to have a guaranteed monthly question, consider becoming a Patron!

Like Loading...
57 Comments
A Song of Ice and Fire, Chapter-By-Chapter, Race for the Iron Throne, Storm of Swords

“…what is the life of one bastard boy against a kingdom?”

Synopsis: Stannis’ camp learns of the Red Wedding, debates what to do, and Davos reads a letter.

Hey folks, I’ve outlined Davos V, and the advent of Spring Break (woooooo!) means that I have some time to write it, but it won’t be ready right away. Thankfully, there’s lots of good stuff in the Tumblrs.

Like Loading...
108 Comments
A Song of Ice and Fire, Chapter-By-Chapter, Race for the Iron Throne, Storm of Swords

“Monsters are dangerous beasts, and just now kings seem to be dying like flies.”

Synopsis: Tyrion has dinner with his wife, is the last to be informed about an important message, has a tense conversation with his father, and goes back to his unhappy marriage.

Hey folks! Tyrion VI is starting to come along – up to 2300 words now! – but it’s going to be a doozy of a chapter, so I’m going to be burning off the rest of my tumblr backlog to give me a but more running-up space.

Hey, folks! I’ve started work on Tyrion VI but it’s nowhere near ready yet, so in the mean-time, I’ve got some good stuff that built up on the Tumblrs while I was working on Arya XI. So much good stuff that I may do two roundups this week.

Like Loading...
61 Comments
A Song of Ice and Fire, Chapter-By-Chapter, Race for the Iron Throne, Storm of Swords

“…Arya ran. Not for her brother now, not even for her mother, but for herself.”

Synopsis: Arya and the Hound survive a massacre.

SPOILER WARNING: This chapter analysis, and all following, will contain spoilers for all Song of Ice and Fire novels and Game of Thrones episodes. Caveat lector.
END_OF_DOCUMENT_TOKEN_TO_BE_REPLACED

Hey folks! Now that we’re done with Dunk & Egg (hopefully just for the moment), it’s time to get back to ASOS. However, it’s going to be a little bit before the next Arya chapter is ready, so in the mean-time, we’ve got some stuff on the Tumblrs.

“What a Wonderful Knight for a Mystery”

For the ASOIAF essayist, Mystery Knight places us in the slightly odd position of having to analyze a short story that is simultaneously the third and concluding part of a trilogy (and thus of particular significance), and merely one part of a series. As GRRM has said repeatedly, he intends to write “eight, nine, ten, twelve novellas” covering all of Dunk and Egg’s time together from their first encounter in Hedge Knight to their deaths at Summerhall. This latter perspective would seem to make Mystery Knight a relatively minor episode in a longer, more complicated character arc.

However, I would argue that Mystery Knight is still worth spending some time on, because it is GRRM’s longest and most involved discussion of Bloodraven’s time as Hand of the King, and thus an important part of our understanding of how royal government functions and malfunctions.

Like Loading...
85 Comments
A Song of Ice and Fire, Chapter-By-Chapter, Race for the Iron Throne, Storm of Swords 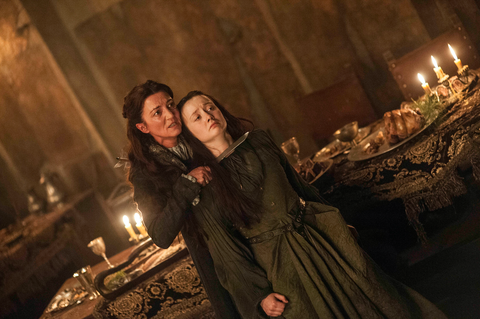 “Was there ever a wedding less joyful?”