45 Comments
By stevenattewell Fire & Blood, Race for the Iron Throne 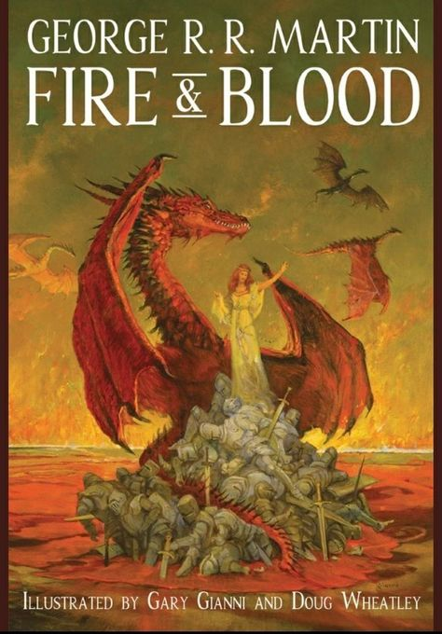 Big news for fans of ASOIAF lore: GRRM has released an excerpt from the upcoming Fire & Blood Volume I, which covers Queen Alysanne’s visit to the North.

There’s some really interesting new material here, which I think bodes well for Fire & Blood as a valuable addition to the broader corpus of lore about the world of ice and fire.

So the first thing we learn is that Jaehaerys and Alysanne’s progress to the North happened in the tenth year of Jaehaerys’ reign (58 AC). What’s particularly interesting from a historiographical perspective is that, while the presence of the ex-Poor Fellows and Warrior’s Sons in the Night’s Watch lets us know that the Reconciliation with the Faith for which Jaehaerys received his moniker had already happened, it doesn’t seem like the Kingsroad had been built (or at least hadn’t yet reached the North) yet, even though WOIAF mentions the roads before the Reconciliation.

While on some level the peace talks between Pentos and Tyrosh are a narrative contrivance to explain why Alysanne is the lone protagonist in this section of the narrative, it is a very interesting picture of the foreign relations of the early Targaryen monarchy – while Aegon intervened in the war against Volantis before becoming king and later we’ll see the Triarchy engage in a proxy war against the Targaryens and then side with the greens in the Dance, we haven’t seen Westeros in the position of the honest broker who has the power as well as the trust to “guarantee the terms of any resulting treaty.” This suggests that Westeros can be quite powerful in trans-national politics if it’s united and well-governed.

Alysanne’s visit to White Harbor has a lot of really interesting details:

And now we come to Alaric Stark, a most Stannish individual. I don’t know if we’ve ever gotten as intimate a portrait of a particularly Northern “Stark in Winterfell” without the southern influences that Ned’s children got from their mother and Ned himself got as a fosterling in the Vale. And what we get is a Stark much more of the “cold” than “hot” variety, always carefully hoarding his resources and hardening his spirit against the coming winter; at the same time, Alaric seems very much in line with the sons of Torrhen, still very touchy about anything more than a notional homage to his southron overlords, worried about the influence of the Seven spreading in the North. (No wonder Theomore Manderly’s relations with his overlord were so cool, given their very different worldviews.)

My big takeaway, though, is that Alysanne’s charm offensive casts the whole business with the New Gift in a very different light. Rather than just an imposition by a remote sovereign, here it feels like it was a real political sacrifice, that Alysanne was forfeiting a lot of the trust that had been carefully built between her and Lord Alaric through the “forced donation of property” while the memory of Torrhen’s “stolen” daughter was still fresh.

Finally, let’s talk about the Night’s Watch and the Wall. First of all, we get a much better picture of the decline of the Night’s Watch, which had eight hundred men at Castle Black alone. Second, it makes a lot of sense that the surplus Poor Fellows and Warrior’s Sons (presumably those in the armies of Ser Joffrey Doggett, given that the army of Wat the Hewer was massacred at Bitterbridge and the army of Ser Horys Hill burned at the Greak Fork) ended up at the Night’s Watch after the Reconciliation. After all, by joining the Faith Militant they had already sworn an oath not that different from that of the black brothers, and thus had no lands, titles, or wives to lose any more. With peace at hand in the South, they were unlikely to find employment as household knights or guardsmen; at least the Night’s Watch would feed, house and clothe them.

But the thing everyone is talking about is how the Wall affected Silverwing. I think it rather unlikely that Silverwing was responding to an ice dragon or the Great Other, that seems a bit intense for what was a relatively calm period in Northern history. My guess is that, just as the Wall inteferes with the bond between a warg and their linked animal, such that a warg on one side of the Wall can’t sense their companion on the other, the Wall also interferes with the relationship between a dragon and their rider.

Whether this means the Wall has to come down, that I’m less sure about. Discuss!

45 thoughts on “Quick Analysis of Fire and Blood Excerpt”

This site uses Akismet to reduce spam. Learn how your comment data is processed.